Dueling is an ageless tradition in societies where the force of arms and the temper of steel are thought to go hand in hand with justice, honor or manhood. Gentlemen are expected to take up arms in defense of their honor and reputation as they would to defend, property, life and limb and their lord.

How a duel occurs and unfolds has a lot to do with how people see the duelists in question.

As there is a host of cads, unworthy foes and other duties to be attended to a person may find themselves in need of rebuffing a challenge to a duel and refusing to enter such a challenge of arms.

A person may rebuff a duel with little social impact by making a Grace save.

Reputation costs of the Challenge and Rebuff
Challenging a superior to a duel and being rebuffed -2d6 Rep Pts. per difference (levels, social class other considerations, it's daring to challenge your betters)
Refusing to duel an inferior and failing a well mannered rebuff -1 Rep Pts.

Any proper duel is attended by witnesses (and could draw a sizable crowd). A duelist should be accompanied by a second who will serve to protect the duelist if things get out of hand and even to fight in their place in case things go poorly.

For an NPC to second for you they should be related, of similar social class and generally of no more then one reputation grade lower the the duelist.
Make a traditional reaction roll to see if an NPC will Second for one in a duel.

An NPC must make a grace save to refuse to second losing 1 Rep Pts when they do so. If refused the Duelist must make a Grace save or lose 1d4 Rep pts because of the humiliation.

The conduct of the duel should follow the standard single combat rules of the system being used.

A DM may require both duelists to consult the Dueling Reaction
chart before conduct commences. 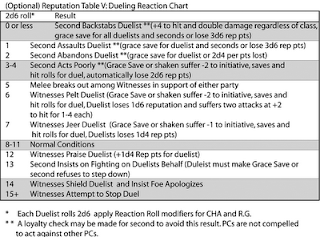 Ones reputation will ebb and flow based on the conduct of the duel.

Challenging and defeating an obvious inferior requires a Grace save of the victor or they may lose 1d8 Rep pts.

Wergild
In some lands the victor of a duel may find himself in a limited (but not always inexpensive) financial obligation to the survivors and heirs. This death price will vary from campaign to campaign. (A recommendation for a typical GP rich fantasy setting is 50 g.p. + 50gp per Reputation Grade with modifers according to social class.)

Failure to meet this obligation can have further fiscal and legal complications and can result in a notable loss of Reputation if it develops into a true scandal.
Posted by JDJarvis at Tuesday, September 07, 2010