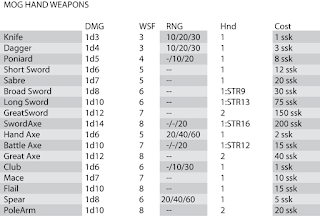 The house rules for initiative as it relates to the Weapon Speed Factor
Each round a d12 is rolled bu one of the players and modified by the character sheet at the top of their roster at the moment (fighting alongside clumsy folks is dangerous).
If the initiative score is under the WSF of the weapon in hand for the round wielded by a PC they are -4 to attack with that weapon. If drawing a weapon during a round the entire WSF is applied as a penalty (if worse then -4).

It's fairly simple and so far it has worked pretty well.
Posted by JDJarvis at Wednesday, June 19, 2013