You often read that a "boring" feature of dungeon design is the empty room. They are considered by some a waste of space on dungeon keys and on dungeon maps. That's because folks don't understand the utility of the empty room.

The utility of the empty room to build tension is obvious it's an easy cure for "a monster behind every corner syndrome". It breaks up the pattern of open door, kill everything inside and loot, breaking up patterns builds tension as it forces people to think about what to do next. Wandering monsters don't just roam corridors and tunnels they also wander into rooms, is it worth searching a seemingly "empty" room and risking begin stumbled upon mid search, or alerting an un-empty room next door?

The use of the empty room to describe space and build atmosphere is simple: this dungeon is so big nothing has claimed this space…yet, this dungeon is so ancient and abandoned no one else has stumbled upon this chamber in decades, the feud between the orcs and goblins has force them to abandon this are, etc…
The empty room fills things out and suggests reasons for why the room is "empty".

The empty room as place to hide is very important if playing a game where folks are paying attention to fatigue and encumbrance. If a party must rest they must have a place to rest. If there is too much too to haul out while romping about the dungeon exploring and tangling with threats it sure is useful to have a place to stash the loot others aren't' paying a lot of attention to so you can carry the load out later. The empty room is a place for the dungeoneers to claim as their own even if  for a short while.

The empty room as battle-ground is useful as a place to draw fights from occupied areas. It's hard to ambush monsters in their own lair, it's not so hard to do it 200' feet away in a different area. If one has a dungeon with various competing factions and chatty negotiating players the empty room also play a good spot for settling duels and battles; few folk like hosting a battle in their living room but they can be talked into fighting in some other space. 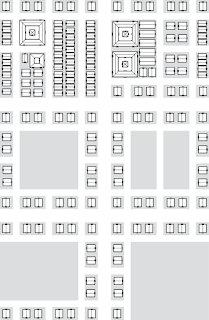 Posted by JDJarvis at Friday, February 22, 2013 No comments: 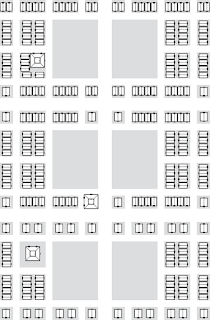 Posted by JDJarvis at Friday, February 22, 2013 No comments:

Set A1 of town geomorphs. I went with a larger base tile to gove me more room for variations later. They are 15 by 15 square, they'll fit just fine with other folks 10 by 10 geomorphs. 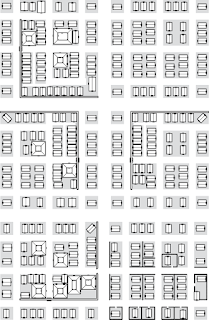 Posted by JDJarvis at Thursday, February 21, 2013 No comments:

OH NO, the Chinese Army hacked my credit card account and bought 200 lbs of dice, 30 cases of tequila and 600 lbs of steak in stores the next town over...

Posted by JDJarvis at Wednesday, February 20, 2013 No comments:

We just completed session 2 on Mog. The adventurers followed up on a rumor of three local low-life's having discovered what they thought to be an entrance to The Undercity of Mog. Tracking the lowlifes proved easy enough and led to a subterranean labyrinth paved in stones from ruins on the surface.

The first couple of chambers discovered were not promising all that was discovered was evidence others may have looted the area ahead of them, and the likely stair case deeper the party found themselves ambushed by a dozen albino rodents the size of dogs. Despite Roric and Beck being surprised the rest of the party quickly dealt with the creatures slaying them in but 2 rounds. Vistara's Gods decided she had cast Brilliant arc enough times in the day so she lost access to the spell. The rodents tracks were followed back to their lair where all that could be found was droppings and nesting.

Further but not too far from the encounter with rodents the party discovered a door with a broken lock pick. The Gremlin was unable to open the door with his talents so Beck the Cyclops Fighter smashed the door in alerting the occupants that rushed to combat: half a dozen mummified pygmies attacked.
This fight was quick as well with Beck suffering the brunt of attacks, but none of the party were seriously injured.

While everyone else was bandaging themselves or their allies Norvan stealthily searched the chamber tryign to find choice goodies dodging a falling block in the process but to no avail as the urns that had been in the room were smashed during the fight.

A Door was discovered behind a cracked plaster wall and among urns beyond containing dried up remains of ale and withered dry barley corns was found 200 Electrum Eagles a coin still in use after it's introduction sometime in the middle of the past millennium,

Posted by JDJarvis at Tuesday, February 12, 2013 No comments:

Here's what the Player Character sheet front looks like for my Mog campaign. 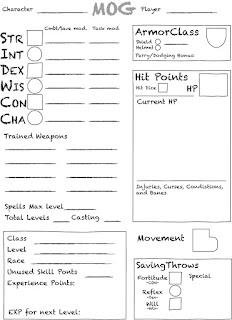 Nothing super fancy and prone to editing if the campaign last long enough. The back isn't all that amazing its basically a bunch of lines for equipment carried, skills known (player's choice), and languages.
There's a large HP box because HP get used a lot. there is no treasure tally on the sheet, I'm using a simple thing related encumbrance system and 200 coins is a thing. Having a separate tally on the sheet tends to divorce money from encumbrance in lots of games I've played, so there is no separate entry for loot.
Posted by JDJarvis at Tuesday, February 12, 2013 No comments:

I knew it would happen when my Mog campaign was going to have a free-form pick your own skills skill system: folks were going to pick combat skills, and they sure did.

So the easy hack/kludge/house rule. Players get to roll extra dice on damage but only add the points that are rolled as a 1 or 2 per d6.  The skill system normally allows for a task modifier for ability scores but with combat skills this is ignored as characters already have ability modifiers factored into combat.

Folks with combat skills also get to reduce damage they suffer from others attacking with their combat style if they are parrying/dodging/fighting defensively for the round. The damage they can reduce is the same 1 or 2 per d6.

Haven't seen it in play yet but no crunching doesn't show it will be onerous.  currently skilled characters get to roll 2 dice for normal skill rolls when skilled in a field (legends get 6 dice) I might crank that down to one die when applying combat skills as folks already have rolls in the combat system. I'll be leaving that for play to shake out.

Ex: Blaine is skilled with broadsword. Normally he would attack with a 1d20 and do 1d8 +1 damage (thanks to STR) factoring in the extra skill Blaine get to roll 2 extra six sided dice and any roll of 1 or 2 is added to damage. That works out to rolling 1d8 +2 for damage on average to a maximum roll of 13, pretty sweet for low level but not overwhelming.
the mightiest fighter in the land with a STR of 21  (+6 damage in houserules) and a legendary broadsword fighter will be dishing out 1d8+9 pts of damage most of the time with a max of 26 points on rare occasion, not a game breaker for high level characters.

Posted by JDJarvis at Thursday, February 07, 2013 No comments:

Tonight we rolled up characters for the Mog campaign. There were a couple snafus such as the printer decided it was time to run out of ink while trying to print three 8-page campaign primers which included the house rules and equipment charts.

I updated skill purchases and the related post: http://aeonsnaugauries.blogspot.com/2013/01/skills-and-player-character.html

To Do List: Edit the primer and get it printed. Include a table for beasts of burden and mounts. Headgear and Facial Hair tables look necessary as well.

One player really wanted to be a shaman and was convinced he could play a Zealot or Acolyte as if a shaman, thus we ended up with Carrainna the Amazon Zealot.

Posted by JDJarvis at Tuesday, February 05, 2013 No comments: