Hex maps and RPG campaigns go back to the very first fantasy campaigns due to the wargaming roots of  the hobby. One of the features of the hex map I have always disliked was the monolithic nature of the hex symbol. In the standard hex map a single symbol defines the entire contents of an area outside specific notes that a GM may have on said hex. One way around that is to denote general elevation or terrain type by a color code (I have done some of that in the sample map here). Another way to expand on the utility of the hex map and get a use out of those hexes is a detailed hex border.

The detailed hex border adds a layer of detail that expands on the GM's descriptive repertoire and in the player's agency in making informed decisions. In the example map here I have provided a number of border details to expand details and to clarify. 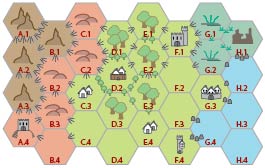 In the sample map we have six general types of terrain. Border hexes expand on the relation between some hexes by indicating troublesome or notable differences in travel between hexes. The border details show are for elevation, forest travel, swamp hazard, and shoreline danger. Each border detail has 1 to 3 little marks for each symbol denoting the level of significance at that border from notable, serious, and major.

How serious each border hazard is would of course be relevant to  game, campaign, and even the adventure as what is noted could vary on map scale.  For ease of handling in old-school play a hazard can be avoided on a 1d6 roll over the number of hazards noted on the border detail, requiring specific equipment to make that roll, give a re-roll, or to avoid the impact of a hazard can expand utility an increase the utility in player choices.  One difference in elevation may just slow progress but failing a check against two could indicate a party member has stumbled, failing against could indicate no progress at all in absence of ropes in addition to the greater risk of a potentially deadly fall.

A GM could of course elaborate in notes as to the contents of a hex:

I'm going to work on this idea some more and share it here of course. Difference in scales intrigues me the most as it may serve as a functional means to make more local hex travel meaningful. I'd be delighted in any reader's input.

Posted by JDJarvis at Monday, December 28, 2020 No comments:

Just a teaser peek at a project I'm working on, here's a list of firearms I'm working on for my Rust and Runes RPG setting rules and guidelines. Might get trimmed down, might get expanded.

I've got damage ratings for all the weapons to fit in line with old-school dungeon games and moderate compatibility with related post-apocalyptic games. Working on ranges now.  Also fiddling with my version of weapon speed and recoil impact on targeting multiple shots, that will definitely be included to use or ignore as GMs wish. I had briefly toyed with weapon vs armor charts for all the weapons but that might be a bit much as I eventually want to have stats for variations in construction and quality as well.

Posted by JDJarvis at Monday, December 21, 2020 No comments:

These Alternate Attack Tables for Old-School Dungeon Fantasy RPG games are written to play combat as a challenge between the fighting prowess of combatants. These charts are written with the notion characters do not merely progress in their skill in striking through or past armor but in outwitting opponents and outfighting opponents.

Armor Class is still factored in standard missile combat and in combat between classed opponents.  If one wishes to match prowess of combatants instead it is adequate to convert character level to HD.

All of the tables show the modified attack roll or greater required to hit an opponent of specific HD or a range of HD. When there is an exception due to much greater capability of the attacker vs a foe that is noted in the chart with a special letter notification.

Clerics Smiting Undead by Any Means

F- indicates any attack regardless of modification shall hit except for a natural d20 roll of 1 which will miss. If the spell or magical device normally allows an opens to make a saving throw that saving throw automatically fails.

F- indicates any attack regardless of modification shall hit except for a natural d20 roll of 1 which will miss. If the spell or magical device normally allows a target to make a saving throw that saving throw automatically fails.

Posted by JDJarvis at Friday, December 18, 2020 No comments: