The wife and I wanted a few yucks and kid free time so we went to see "Your Highness" yesterday. It's a fantasy comedy where bad boy/lazy Prince Thadius goes off to help his handsome dashing brother Prince Fabios save his lady love from being violated an evil sorcerer that has kidnapped her. Pretty straight up fantasy flick plot with a twist.

It's a gross, juvenile, sophomoric movie that technically is an awful lot like a third or so of the D&D games I encountered as a teen and not too far removed from the occasional session as an adult. It's not an un-enjoyable film , the wife liked it more then I did. The ever present low-brow humor is amusing but just barely there were only a few big laughs that I enjoyed and I suspect they were more guilty laughs from recollections of D&D games past.


Is it worth the price of a movie ticket? Maybe, as long as your expecting piggy sex jokes,potty humor and stoner jokes in a fantasy medieval setting with good acting, respectable effects, graphic gore, nudity and good costuming.

No game tonight so, instead of spending my time on last minute game prep, some writing or anything overtly productive I've been doodling. I was drawing on my baby boy's wall (he has a big pad of paper in one spot) and whipped up a knight not too different from the fellows here and went to work whipping up a few on my computer and knights aren't cool without a dragon so the green fellow was added into the mix.

in my regular game the PC's have found themselves wintering in the largest city in the region and are doing a bunch of shopping, tavern-crawling and real estate shopping to get themselves established.

One of the PC's has hired himself a lackey to follow him about and "assist him" with his biological needs, for 3 s.p. a day. 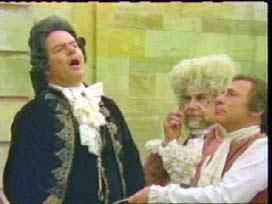 Detailed and realistic role-playing is always rewarding and uplifting.
Posted by JDJarvis at Tuesday, April 05, 2011 3 comments:

The Naked Warrior or Diapers in the Dungeon

Mythmere posts here in Diaper, Helmet, ADVENTURE on a cool Erol Otus pic that appeared on the back of the AD&D module White Plume Mountain that seemingly has a fighter wearing a horned helmet and a diaper . A simple mechanic is posted that suggests fighters are always considered to be of an AC equal to that of chainmail even when sub-optimally armored (like in a diaper and a helmet) to support the sword and sorcery naked warrior look.

Sure there were times in real life when naked warriors charged into combat and it unnerved foes but generally an under armored warrior is a dead warrior. The following are a few rule suggestions to encourage the diaper wearing dungeon bravo without giving them constant undue advantage in combat.

Give fighters a 10% exp bonus for adventuring for an entire session wearing no more armor then a helmet and a shield.
If the fighter can survive long enough to become a better fighter by gaining a level ahead of his better armored colleagues he's a better fighter in the mammoth-hide diaper and horned helmet.
(NOTE: in some adventures and settings this may back-fire and induce reaction penalties and even an exp penalty.)

Whenever an npc is facing a foe of equal or greater level who is naked (shields and helms are okay) they must make a morale save or be shaken causing them to lose initiative for the next two rounds before they can gird themselves again for the rigors of battle.

Whenever a virtually naked warrior is unencumbered by additional gear they are far more agile then overburdened and heavily armored fighters. Such fighters may climb walls as well as a thief of 1/2 their level and are +2 to save vs attacks where agility and lighting reflexes may save the day. Any degree of encumbrance that inflicts a penalty in your favorite game system causes the loss of this bonus.


The Wooing the wicked witch in your underwear rule-

The naked or nearly naked warrior is better at swaying the attentions of the potentially amorous gaining a 2 point bonus (or it's equivalent compared to a 2d6 roll) to reaction adjustment. Such characters are also more likely to be captured for...uh..."interrogation" later as opposed to being slain outright. Those who make no RPG attempts along amorous line lose this advantage.


Uh, pardon me miss but I can see your breasts rule-

In some lands men-folk are foolishly fascinated by breasts or are prone to underrate the competence of women warriors. When confronted by a nearly naked female warrior a male warrior must make a wisdom check (or save) or fail to judge the danger they are in. One who fails such a check is unable to act meaningfully for a round on confronting the nearly naked female warrior and will be -2 to hit her until they see her kill an ally or are themselves harmed for more then 1 pt of damage.
Posted by JDJarvis at Tuesday, April 05, 2011 7 comments:

1-2: Staggered- The blow knocks the defender off balance. Additional attacks against the target this round are at +2 to hit and the foe suffers a -2 to any attacks they have left this round. The defender may be pushed 10' by the attacker (who may follow up as free movement) if the the attacker is of at least equal strength or of a larger size.

3-4: Stunned- The blow stuns the foe who is unable to act meaningfully or move under their own direction for the remainder of this round and all of the next round. An ally may help the defender move 1/2 their movement rate. The defender may not cast spells or use magical devices while stunned and attackers may get bonuses to their attacks vs a stunned defender.

5-6: Clobbered- the blow wounds the defender so as to reduce their movement rate by 1/2 and cause them to suffer a -4 penalty to attacks and saves until the wound is healed.

Some foes are immune to specific effects, or may get a save vs some critical hits.

For a really cool use of other RPGs properties in D&D-like games as they relate to Critical Hits (and other areas) check out this post on using Boothill rules in D&D.
Posted by JDJarvis at Monday, April 04, 2011 1 comment: