The cleric as presented in D&D and similar games has always been a curiosity to me. Not every faith has the cleric as magician or equates the workings of clerics to be similar to that of magicians and claims the supernatural workings of the cleric to be apart from those ascribed to magicians. What I strive to do is to work up games mechanic to further differentiate the powers of magic-users and clerics in old school fantasy gameplay and link this to popular forms of play thus "Dungeons and Idolatry".

When considering magic for a fantasy game campaign it isn't unusual to wonder on the origin of this magic. Is magic the result of the would-be caster's will and knowledge or is it by association to elemental and supernatural forces of the universe? The source of a clerics magics are generally considered more specific or at least tempered by the relationship a cleric has with the powers behind their supernatural workings. So in face of this consideration I have turned to idolatry (or a crass and simple view of idolatry) as a method and focal origin of clerical magic.

A question not often asked but often described in myth and fiction is "Where does magic happen?". Fiction and myth are overflowing with magical places from entire parallel universes hiding alongside out own to magic circles being scribbled on the ground as the workplace for magic. So now the easy answer is for the cleric is that a significant portion of that magic happens alongside shrines, temples, and altars with the presence of the idols of their faith. This has a number of ramifications to consider such as the establishment of magical places of a faith, access to such places and how that magic is used.

So who can establish a magical space for a faith? Major agents of the faith be they avatars of the deities of a faith, saints, or acolytes all are often invested with the power to mark or establish a place of power that is recognized by the faith. This lends itself well to level based old-school fantasy gaming where clerics of advancing levels have greater associated powers; a 1st level cleric mat be able to temporarily make a space safe for a minor blessing but a cabal of  priests of level 10 or higher ma be required to sanctify an altar capable of being the dead back to life. So , no surprise here, it is one or more clerics of adequate level in alliance with their faith that may establish a magical space for use by themselves and others.

In answering who can establish magical spaces of a faith it is also heavily implied that the cleric is who has access to these spaces. While the general public and the laity of a faith may beseech their gods and make offerings in that regard it is still generally recognized that clerics acting as acolytes of the faith have influence or control of the situation. This presents several facets that can be applied to a cold school fantasy campaign to enhance and add verisimilitude to the relationship clerics have to their faith. Clerics would be required to travel to and associate with other clerics as they do in the real world and fiction. The significance of place also puts it above the and beyond specific characters and makes the location of said place important; if only one temple of a faith allows it's clerics to resurrect the dead that becomes a very important place to the faith and does it retain it's powers even in absence of acolytes in attendance?

The answer to the question in relationship to the question above is "of course it does" but there are associated ifs. The power of a magical place can only be accessed by one recognized by the power of an intact idol, perhaps only by one in knowledge of specific rites and an intact altar. Idols and their associated altars and shrines can indeed populate the ruins and ever popular dungeons of fantasy campaigns. This gives another reason for adventures to happen in a campaign and for places of importance to retain importance.

So in future postings I will write on how to revise the cleric to provide for the duties of acolytes, and the importance of shrines, altars, and such for Dungeons and Idolatry.

Working on multiple gaming projects including a fill in your own hex-crawl pdf form book. 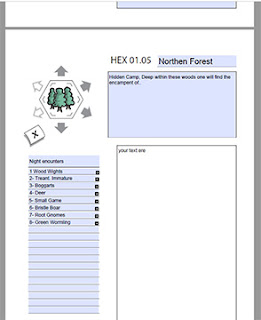 Each page will feature a shot of the hex from the editable map (the hex graphic is editable from the main map or on it's entry page). a Quick encounter listing box , a longer entry box, and a list for encounters, price lists, or whatever the user desires. The arrows circling the hex allow for navigation from hex to hex without returning to the main map item. That little X in the box gets the user back to the main map as well. Not done yet but it's moving along. This will be an inexpensive commercial release because trust me... you probably don't want to spend the time developing this yourself and will have more fun packing in gaming details for a campaign.

Posted by JDJarvis at Wednesday, March 16, 2022 No comments: