[OT] Keep The Zombies Away

We had to bury our old cat today. Morgan was an 18 year old medium hair tortoise shell calico that has been suffering from kidney disease and being old as heck for some time now. I dug the grave on a little hillock just a few dozen yards from the river in a sunny spot. The teens are way for the weekend but the toddler is home so we brought him down to explain what was going on and why we were burying the cat (in a box). After we placed the cat in the hole and filled in the dirt I dragged over a couple logs to sit on top of the grave until the earth hardens and the toddler agreed that was a good idea becasue it would keep her safe and buried so we could keep the zombies away.
Posted by JDJarvis at Saturday, April 28, 2012 No comments:

What's Going On In the Dungeon? (part One)

You've got a dungeon, it's full of monsters... but what's going on down there?

while it can impact the setup up of a dungeon without a doubt the going's on in the dungoen will impact how play evolves and is impacted when the PCs descend the first staircase. Here's a few notes on general goings on for now:

Civil War- Two factions are at war with each other, there will be traps along seemingly open travel routes, fresh barricades, patrols, heavily armed (or dangerous) bands of combatants, frequent patrols, and sentries near borders. Delvers may find stockpiles of food and weapons, battlegrounds full of fresh corpses, an explosion of dungeon vermin feeding on the freshly dead and forces on edge that will be difficult to surprise. There should be opportunities to exploit the situation, perhaps a side can be joined or a treasure left unguarded?

Menagerie- this is a mad wizards zoo. The dungeon is here becasue a Wizard did it. the dungeon is here to either grow monsters, collect loot from hapless delvers, or hold the wizard's collection(s) of oddities. There may be clean-up crews and guards along with apprentices and colleagues on site. Oddities are unlikely to be undefended and some of the occupants may long for escape with the assistance of the PCs.

Home Sweet Home- This is where the monsters call home. There will be a dominant faction of occupants going about their normal lives all others within will be minions,guests, pests, or thieves and the dominant faction will react to them appropriately. PCs may be able to strike a deal with the occupants to clear out some troublesome creatures or find employ as mercenaries. If the outer perimeter can be breached with little incident the party should have greater opportunity for stealthy thievery with less threat from wandering monsters of unexpected sort.

Prison- It's a prison. The occupants are either jailers, prisoners, or vermin. Depending on the nature of the prison there may be little to loot and it may be possible for PCs to find themselves trapped within. There may be factions within the prison population, VIP prisoners that will offer reward to liberators and possibly future henchmen of worth to be recruited. There will be regular patrols and procedures of the jailers to deal with and the whole problem of how to get in and out without being noticed.

Mining- The dungeon is a mine currently being exploited by one or more groups. There will be invaders, claim jumpers, miners, and possibly slaves to deal with. Stockpiles of ore (or whatever is being mined) will be present as will supplies and tools for the miners. Monsters within the dungeon will be employed in mining, defense, or pests interfering with operations. Miners may be very happy to have adventurers on hand to clear out some troublesome invaders. Maybe the PCs can take over the mine for themselves?

Catacombs- the dungeon is a collection of crypts, it's a resting place for the dead. An abandoned an old catacomb is familiar dungeon-fare filled with undead, traps, and tomb robbers. A catacomb in use will have funeral processions, vagabonds hiding in secluded corners, serve as a meeting place for illicit business and may house secret cults going about unusual rites not generally approved of by society outside the catacombs. The normal users of the catacomb may well be common folk that will not take kindly to bands of "adventurers" looting the remains of their ancestors and loved ones.
while the dead are supposed to stay put in a catacomb the place is not necessarily abandoned or under-used.

Wilderness- the dungeon is a subterranean wilderness occupied by a varied host of creatures. Tribes of creatures will still be hashing out their territories and relations with other humanoids. Fearsome monsters may lurk that are unknown to most occupants and the by-ways and passage ways will not be regularly patrolled or known to any. A dungeon wilderness presents room for exploration,exploitation, establishing allies, and finding employ for PCs. There is no established order and no dominant factions.
Posted by JDJarvis at Thursday, April 19, 2012 5 comments:

I hate the usage of the word Gish. Somehow in the past decade Gish has become an acceptable in some of RPG land as a generic term for Fighter/Magic-User. How the heck did that happen?

Gish, is title for a specific type of Githyanki as presented in the original Fiend Folio. For the vast majority of D&D campaigns, there is no reason for this word to have leaked out into general use. I've probably used Githyanki a dozen or so times in the past few decades but they've never stopped to discuss how their forces are designated or identified and the PCs (and players) never bothered to ask.

How did this decidedly uncommon encounter type enter the lamestream of D&D fandom as a common term to define character types? And why?

Nothing screams heroic archetype like a fictional word for a subset of a rarely encountered monster from within a society decidedly separate from the traditional D&D societies...
Posted by JDJarvis at Sunday, April 15, 2012 15 comments:

After getting some funky dice and seeing how they roll I realized I might need myself a dice tower to make sure the new dice (and the old one as well) roll as fairly as they are capable of rolling; a dice tower seems to be the best solution for looks and utility.

Anyone know where there are good plans for do-it-yourself dice towers?
Posted by JDJarvis at Friday, April 13, 2012 4 comments:

The Demon Queen Meets Her Match

She never had a chance....cruel, cruel, multiverse... 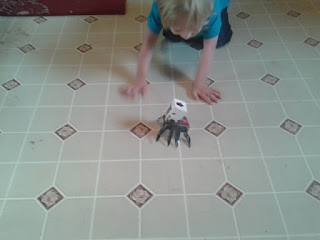 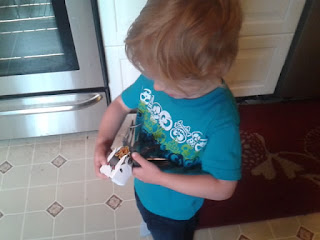 While attending PAX this past weekend my over 60 year old father revealed a secret about him and his dice use I've missed over the years.

My father was reluctant to hop into an open D&D game becasue he didn't have his briefcase of doom which holds his game stuff and most importantly his dice. It seems he has over the years determined which dice roll well (and evenly) and to prevent polluting any of them with bad luck he has seven of each on hand and makes sure not to roll one again in sequence before rolling a die he has yet to use if he can help it. I giggled insanely when he disclosed that and assured him that would be showing up on this blog.

I shouldn't laugh too much however as the players try to keep their dice away from me because a number of times in the past I've looked a player in the eye , said "jinx" and tapped one of their dice and it has rolled poorly the rest of the session...bwahahahaha
Posted by JDJarvis at Tuesday, April 10, 2012 1 comment:

Got back from PAX in Boston a little while ago. 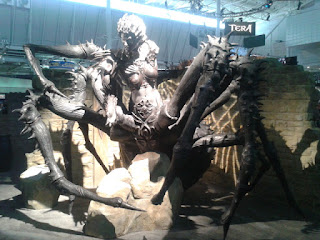 Lolth, the coolest thing about the WOTC booth which besides the castle walls was boring as waiting in a line for a bad commercial. Not one darned word about the new edition they are cooking up... they are sure putting some marketing energy into that... 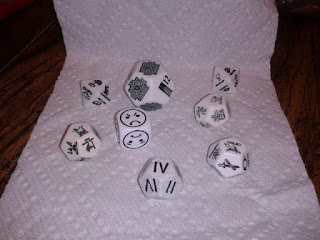 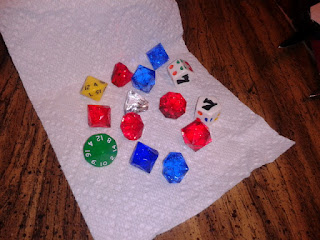 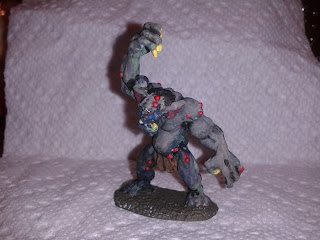 A Reaper mini freshly painted at the free paint and take area. Not so bad really considering I didn't bring my reading glasses to the con. Everything within 2 feet of my face is blurry 72 dpi at best. It's one of their new line of plastic Bones miniatures, they paint-up really well and don't need a drop of primer. 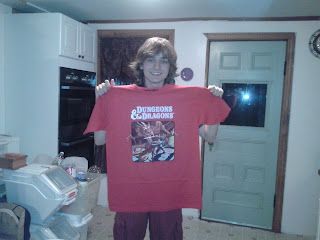 My oldest child with his new Dungeons And Dragons T-shirt.
Posted by JDJarvis at Sunday, April 08, 2012 6 comments:

Combat is dangerous, everyone knows that but attacking a monster in a OSR game puts one at little risk if they are successful. Sure victory is nice and some games offset the risk of a failed attack by makign to worse and turn some failures, such as rolling a 1, into a fumble.

"hmm, a 1 one and you are standing in a pile of orc corpses, you hook your foot in the entrails of a slain foe... make a save to move free"... it generally works fine and there is little argument. But...well, it isn't usually risky enough. I just came up with this idea (which I'm sure someoen somewhere lese must have once had), make every attack roll dangerous.

Counter Attack: Any d20 melee attack roll that is equal or less then the level/HD of your foe invites an immediate free counter attack from a non-surpsied physically capable foe on a hit or a miss.

Bingo... simul-kills are possible, like in real life, each attack is potentially dangerous and more so against more dangerous monsters. It works both ways as well, low level folks had best be very cautious when attacking legendary foes.

Example 1:
Sir Dwaine attacks an Ogre his player rolls a 3 on his attack...
Unfortunately for SirDwaine this is equal to or less then the Ogre's 4 HitDice inviting an immediate counter attack... the ogre bashes Sir Dwaine upside the head.


As you can see from example 2 a single blow at high levels could become an entire series of attacks and counter attacks... all resolved in the same combat round. A great idea.. maybe not, some combats might stretch out very briefly but if more HP are beig dished out it may indeed shorten the amount of time it takes to resolves the combat in the real world as one isn't switching between players to resolve the counter attacks and every attack puts the aggressor at risk. It also invites greater havoc against combatants who attempt "sweep attacks" or attacking more then one foe at a time.

I'm likely to give this a whirl soon, if anyone else does so or is already doing something similar I'd love to hear about it.
Posted by JDJarvis at Saturday, April 07, 2012 4 comments: