Yesterday played the first session of a hopefully monthly "D&D" campaign. I initially wanted to be purist to some extent and use just one set of rules fro the campaign but couldn't settle on which one so I ended up hacking together a Franken-game using Seven Voyages of Zylarthen (authors blog here), Basic Fantasy RPG , Swords and Wizardy, Lamentations of the Flame Princess and liberal samplings from the blog-o-sphere using bits from Trollsmyth, Dungeon of Signs, Goblinpunch, Middenmurk, Elfmaids and Octopi, Sham's Grog and Blog and of course this here blog itself and houserules I've used in recent campaigns.

I've got a simple skill system that uses the "Hidden" Universal non-binary resolution system of D&D. There are about 18 skills including Weapon Mastery that can be applied to a general types of weapons (so there is no exact count really). There are but two races to select from at the start Humans and Brownies and one of three classes from among Fighter, Magic-User, and Thief. The spell list is straight out of seven voyages with a few minor tweaks to individual spells to better fit the franken system. Players got to roll 3d6 seven times and were allowed to assign the scores where they wished with the one exception that a brownie had to have the worst roll assigned to strength. Of the four players we ended up with 2 human Fighters, a Human Magic-user and a Brownie Thief .

The Rabble Weapons from Tom Fitzgerald's  posting on Terrible Weapons and the groat based economy have worked great so far it's made it very clear that the fledgling adventurers are adventuring to better themselves with short term goals being weapons that aren't awful and a good pair of shoes. One player ended up assigning a 13 to Charisma so he could start play with a free militia rank weapon (a perk for starting fighters). The players also avoided fights I would have seen folks attempt in the past. They spent most of the time sneaking and scrounging having "borrowed" a boat someone carelessly left unsecured near a shabby alehouse and a "firefly" lamp left just hanging by the docks at the edge of Gnomeville. The players avoided trouble with a second rate patrol of Harris-men (soldiers of the local Earl Harris)by coughing up a 3 groat per head toll (one PC couldn't' afford it but one of the other party members could). Simply did not engage the patrons in the alehouse figuring it was easier to steal the boat by stealth (one PC had considered trying to win it gambling or in a drinking contest but the other players wisely pointed out they had nothing to gamble with). The party almost ran into disaster when they discovered they had but one torch but they used most of their remaining cash to but 4 more, which still left them woefully short so that gnome "firefly" lamp was just too good to pass up.

One session in, no fighting yet and the 4 players had fun. We have another session scheduled next month. My daughter is still interested in having some of her friends come over and play so i might squeeze in a game with another adventuring party before next month.

Here's a copy of the current character sheet, It's got an embarrassing typo and a silly omission that will need updating but here's what the players had to use: 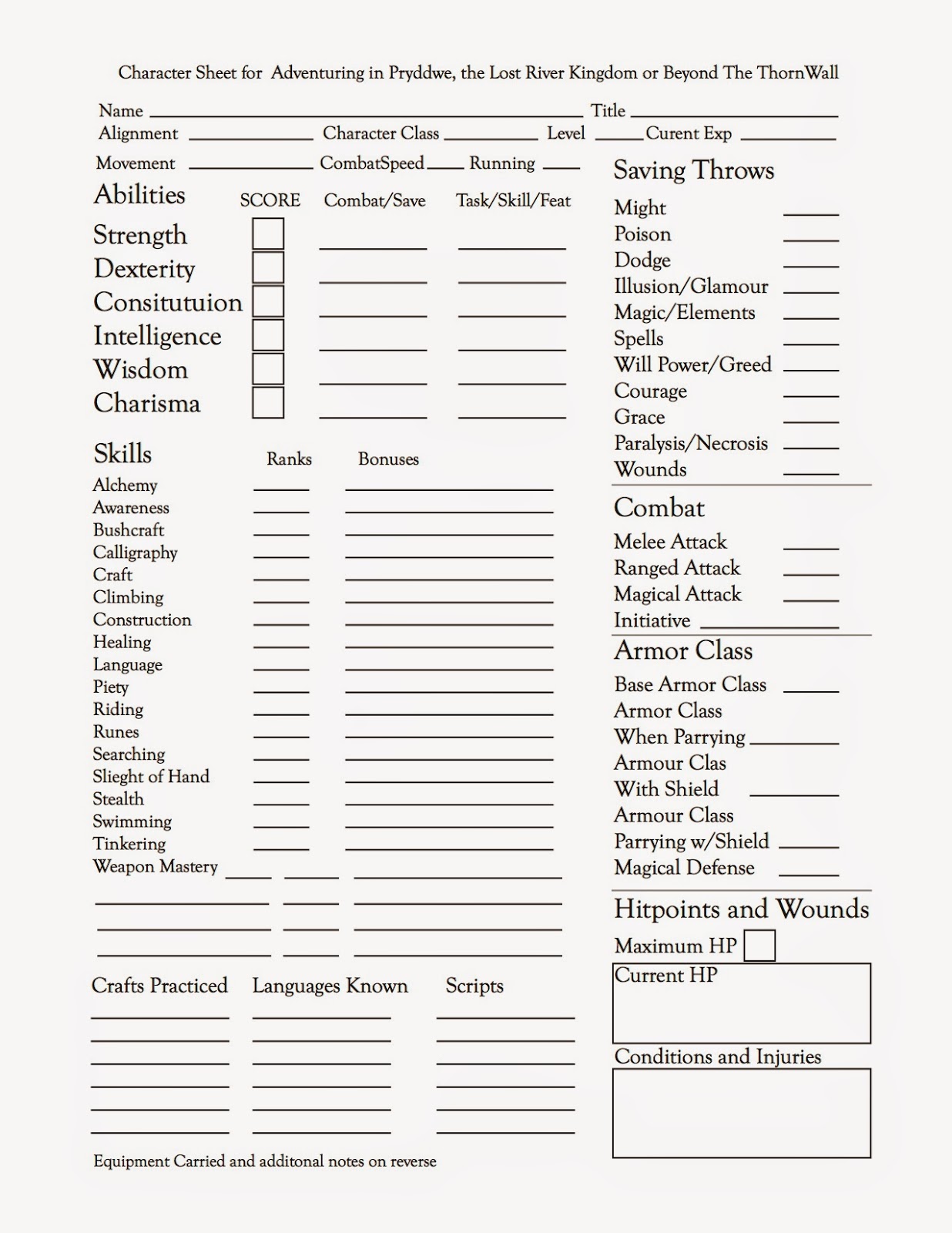