I've been prepping a new campaign and tuning house rules lately.  The training/loot-exp posts are part of that.  Here's the map of the grand overall campaign setting. 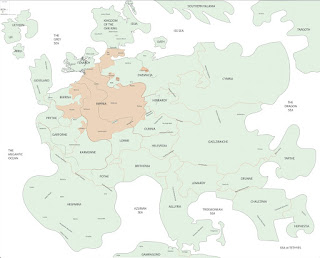 This is the continent of Aroa. The highlighted realm is Riperia. I've been playing with Riperia as campaign setting for a few years now and it's getting turned slightly and having the neighboring nations fleshed out a bit more.  The largest change beyond the overall expansion is the addition of the fey realms north of the Thornwall.  I've taking some place names from campaigns past and will be ressurecting pieces and shoving them in where they fit. No good reason to abandon over 35 years of campaign notes entirely.

Garforne, Gossland and Tridge survive from my earliest campaign map drawn in 1980 or so. Not sure if that map itself still exists. The Thornwall and nearby realms were initially worked up only a couple years ago. Some place names and associated histories will lurk form my late 80's/early 90's campaign.  The Talmyrian Empire is no more but it will be part of the history of thsi setting (I also have to dig out that map and revive a bunch of cities).

It is all in all a classical fantasy campaign with feudalism, quests, dragons and knights. This the only.human dominated portion of the world I'm likely to worry about for some time. Common Men share the world with Amazons, Valans, Brownies, Elves and Half-Elves (Light, Grey, and Dark), a variety of Hobs, Gnomes, A few types of Dwarves ( Hill, Dvarga, and Daro) , Gorans (Giant-kin), Beastmen of several kinds (Simbai-Felines, Vroo-Canines, Velch-Vultures,Aigossians-Goats, Pongar-Apes, Salamin-Reptiles) and wretched Trollkin. They are opposed by a wide variety of hostile folks including Bwgs, Trolls, Orcs, Giants, Dragons (both hive and solitary), Octons, Gargoyles. There will be little touches of sci-fantasy but it will not be an omnipresent sub-theme.

It's not all fun and games with the "friendly" races they don't even all have a homeland on the main campaign map but they are able to relate to men in a generally neutral if not friendly manner. Elves tend to want to be left alone. Hobs would rather tend to their own affairs as well but don't mind having a human over as a dinner guest. Dwarves are concerned more with the subsurface world but openly trade with humanity. The Goran are found worldwide but their ancestral homeland remains (mostly as old ruins in Gossland). Most of the beastmen hail form lands beyond the map but the Aigossians are native to Chalconia and Vroo to the wilds of Targoth.

Despite the presence of a few types of elves, dwarves, and halfling I want to avoid ren-fairia as much as possible. There will be no elven serving maids at the local pub and while people are aware the Simbai exist they may have difficulty dealing with one in the flesh. The Vroo actually have rather poor reputation as raiders and brigands within Cymria. Yeah it's an "almost europe".

Enough rambling for now. The map is going to change and have a lot of details added. The original map is a computer file 160 inches to 200 inches across at 16 miles to the inch.  With over 8,000,000 miles to fill I should be able to fit in a lot of stuff worth posting about for years to come.