Got some work in on the Riperia campaign map. 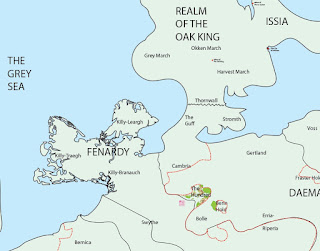 Above is a closer view of the general neighborhood of the campaign starting area. Changed the name of a Kingdom added a region label (most were there on the last map but not legible on the first sample). I did some work on the coastline of Fenardy and some icon geographical work done for The Hundred. (Hmm... just noticed the national border between two countries is missing in the sample shot.) 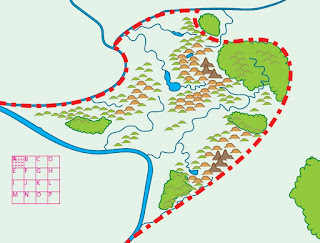 The map above is a zoom in to the geographic detail with iconographic symbols.  There is more river detail on this resolution of the map as well. For scale reference the coordinate grid (which I'll explain in a future post) is 16 miles across and an actual inch at 100% file resolution on the main file.  To come are the keeps and villages for 10 holdings, well thee were never actually a hundred but calling it The Hundred just sounded better than The Eighty Seven would have.  Next detail layer in the terrain will lose some of it's icons with hills and mountains shown as general changes in elevation and details will be exposed in the forests as well.
Posted by JDJarvis at Friday, March 10, 2017