More campaign map samples.  I got the borders in place for the holdings in the Hundred.
Still using symbol based terrain at this point. The map above is a screen clipping of the holdings of the various Lords of The Hundred (sans labels). The map show The Hundred and bordering territories. I got a lot of waterways on the map as they play a role in determining where borders are and where I'll eventually end up putting in keeps and villages. 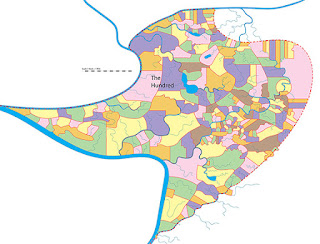 Zoomed in a bit with filled in holdings. There is no significance to the fills in the image above they are simply used to make it easier to see the individual holdings. Some of the holdings are rather small with a handful being near a square mile, one much smaller.

I want the players to be able to have characters that are politically involved with estates and holdings of their own. Knowing where the various holdings actually are and what might be mentioned in a deed is the sort of thing I figure I'll need on a map.