So After a bunch of unrelated games I'm going for it and developing a mutant future campaign.
To coin popular current terms it'll be sandbox and megadungeon campaign. I suppose I'll be calling it the MutantBox for now. I sketched out the setting in a flurry of inspiration here is a bad webcam shot of some of the sketched crude map: 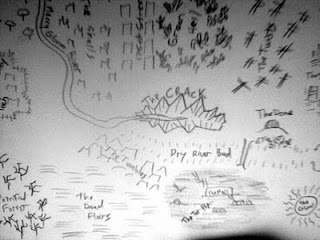 Some of the locations on the shot of the map posted here:

The Petrified Forest- an ancient forest transformed into a hard stone like substance, leaves like blades keep sane folks out. What secrets could it keep safe?

The Dead Flats- nothign taller then 6 feet occupies this pulverized stretch of scrub overgrown rubble. Avian predators are a menace during the day and at night it's rumored the dead roam hunting for the flesh of the living.

The Tar Pit- A vast flat patch of oozing tar with the remains of ancient vehicles and salvage materials serving as a haphazard maze to gain access to the structure in the middle. Predators and scavengers of all sorts are drawn to the edges and out along the makeshift bridges to feed upon those that find themselves stuck in the tar. (possible mega-dungeon location)

The Glow- A flattened stretch of land that glows with an eerie light each and every night.

The Dome- A great golden dome half buried within an age of rubble. (obvious mega-dungeon location)

The Crack- A huge fissure in the earth hundreds of yards wide in places and possibly a mile deep. A river ruins into it's depths ands is lost. Many dozens of cavities and entrances can be seen along it's shattered walls. (possible mega-dungeon location)

Green Hell- A vast and riotously overgrown span of ruins full of a bewildering array of mutant plants.

There are more areas shown on the shot above and several more off the edges of the area shown. As time goes by I'll update and expand.
Posted by JDJarvis at Tuesday, October 27, 2009