Night of the DWights

Recent game-play at my table

The PCs are off on a wilderness expedition seeking the village of black roofs where they hope to find out the location of some Cities of Gold rumored to exist by a fellow explorer. They have enticed some locals into following them along with their impressive magics and alcohol supply.
They've been making an impressive 8-10 miles a day pulling their wagon along and stopped for a day of rest and a little fishing and hunting.

Mid morning the party is spurred into action and curiosity by some of the locals. They are led to a clearing in the otherwise dense forest where a megalithic stone stands atop a curious knoll with a lone old tree and some stones near a notable hollow. 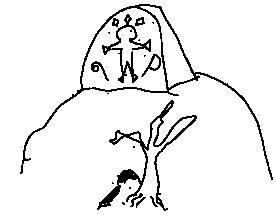 The party moved cam closer to the hill and the clearing. The locals refused to go near the clearing or the hill Tasmetus's followers were left behind as security as the party went on to explore the hill.

The stones to the left were overgrown and engraved, after a bit of work the following petroglyphs were exposed: 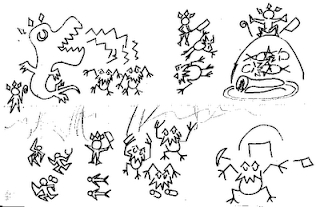 One of the explorers checked the stones behind the tree and noted hints of petroglyphs there as well and after much work the following was viewable: 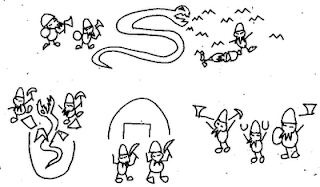 The party (and players of course) spent a good while arguing over and tryign to interpret the images carved into the stones. A host of wild hypothesis were thrown about and the party went on to delve into the hollow at the base of the hill discovering a chamber beneath (who would have thought?). Tasmetus tried to detect magic and was overcome by a surge of magical energy, he recovered shortly after.

From the entry chamber the party descended down a narrow and low ceilinged passage to find a small chamber where their progress was blocked by a great stone disk decorated like a Mayan calendar, after a bit of poking about and labor they rolled the disk aside to discover a short passage.

The short passage led to a larger chamber where stood an immense clay urn 8 feet wide and almost as high. In nooks to the left and right of the urn there were mummified remains wearing delicate and elaborate masks. One adventurer (DeVoto) poked at one with his sword to have it knocked from his grip by the now animated mummy, Tasmetus attempted to conjure a bolt of magical energy to dispatch the mummy and was again overcome by a surge of magical energy. The mummy let out a moan of despair which rendered Devoto and Brom briefly overcome with despair while the remaining companions (Dan Black, Thorgrim and Questor a Henchman) battled the mummy.

The mummies mask crumbled to dust after he was slain and the party all descended as one upon the remaining unanimated mummy to batter it to bits, the cloud of black mold that erupted from the dashed remains did harm to Dan Black and DeVoto who were both sickened and weakened by the the toxic cloud.

Not caring to retreat to recover just yet the party examined the Urn. The Dwarf Thorgrim quickly noted there was a great stone trap door under the huge urn. Examining the urn revealed it to be too heavy to move and it was filled with a bitumen-like resin and bones of malformed and monstrous dwarves. Fearing a trap, animated corpses and such the party set the resin alight and exited the dungeon hoping to burn off enough of the contents to move the urn on the morrow.

Returning the next day the party found the urn split from the heat and much of the former contents burnt away but a royal mess was left behind. They spent a good two hours or more clearing the debris away from the stone trapdoor before opening it and descending down the shaft beneath.

The shaft led to a wide but low chamber which ended in a room flooded by murky water on it's far end. Exploring the water revealed a passage beneath that led not too far off to another partially flooded chamber beyond, guarded by a half dozen golden masked figures.

Not willing to let a little water keep them from the hoped for bounty of the golden masks the party shed their armor and went for a swim. Were it not for the Superior swimming abilities of Dan Black the party may have failed in their endeavors and lost their armor in the water filled passage. Luckily the guardians in the other chamber wee unwilling or unable to enter the water and the party was able to get their armor back one while out of reach of the fetid vermin bearing breath of the raging guardians.

So there they were waterlogged in a half flooded chamber facing a half dozen gnarled and twisted raging dwarf sized undead guardians and the practical thing of course was to attack.
Tasmetus dared a spell again and once once more overcome by a surge of magical energy he would have drowned were it not for the support of his henchman Questor as his companions rushed to battle the guardians.

The battle was fast and furious. The players were dismayed to discover the breath of the guardians was indeed vilely toxic sickening those who failed to resist the airborne pestilence and some weapons that struck the undead guardians began to corrode and deteriorate as did the armor the hands of the horrors buffeted. The party didn't retreat or falter despite the serious morale blow the players were suffering. In the end the players prevailed no PCs were slain, but a suit of armor was all but ruined, a +2 battle axe was now but a +1 battle axe and a spear was now a bent stick.

The masks the guardians wore were indeed golden with beards of turquoise a wealthy find indeed. At the far side of the chamber is a large and sealed obsidian double-door...

So play stopped with the party bemoaning their fate and relieved they survived. The Obsidian doors have to wait for next session. DeVoto and Thorgrim are still feeling feverish and are diseased because of the guardians breath weapons.

The "DWights" were what the guardians were called in my notes as they were Dwarven Wights which had Wight stats except they breathed a nauseating and diseased breath weapon at a single foe (instead of level drain), armor they struck would deteriorate and weapons that struck them (unless made of silver) required the bearer to make a save or they degrade by -1 to hit and damage.
Posted by JDJarvis at Thursday, August 04, 2011