My last post I offered up an idea for playing out the classic hexcrawl with a variant set of mechanics. This post there is going to be an example using a race to a treasure by two different parties of adventurers.

Neither party is overly encumbered and both will have 4 move rolls a day. I'm using 5 mile hexes here.

Party A is confident and determined to make progress with the most direct line of travel possible.

Party B has a guide who knows the local terrain well enough for a +1 bonus, he recommends the party stays well and clear of the mountains and amazingly enough they take his advice.

For this example I'm going to use a planned route assuming the players behind each party have access to a map which shows the hex terrain but not the travel scores (and can oddly enough follow a plan no matter what happens). 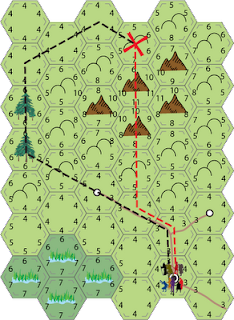 Day One Roll One: 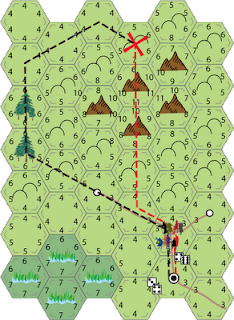 Day one starts off easy enough for both parties, neither finds road travel particularly difficult or hazardous at the start of the day. Party A rolled 7 and Party B rolled a 10, both meeting or beatign the travel score of 3 required to move from their hex of origin into the next hex. 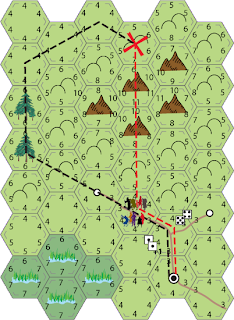 The second roll of the day and both parties are moving along the road. Party B almost didn't make it but were able to carry on without incident thanks to the guide they have employed. 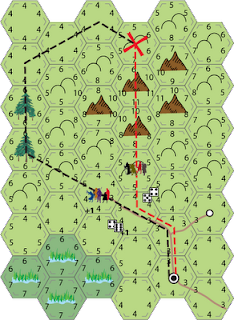 Continuing on Party A travels into the hills making for the mountains and their quarry and party B continues on into easy terrain following their guides advice. 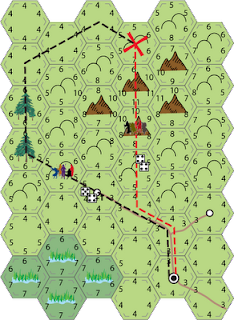 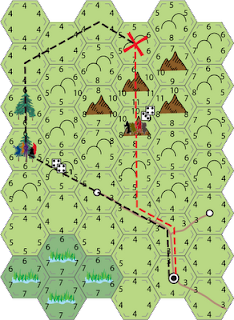 Party A finds itself unable to press on with significant progress. Party B has entered the forest. 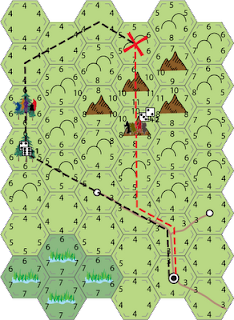 Party A is still having difficuly making progress even with a bonus of 2 to their roll for carrying on along in the same direction. Party B is covering lots of ground within the forest. 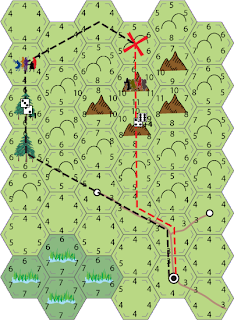 Party A has pushed on along it's route and made it further into the mountains in the north, they would have gotten a +4 bonus for their continuing travel along the same direction but rolled well enough it did matter. Party B has left the forest. 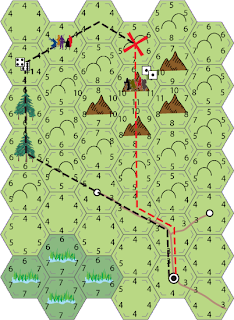 Party A just isn't feeling very lucky and is unable to make it's way out of the mountains. Party B is doing well. 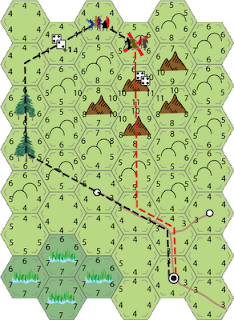 Party A has made through the mountains and down into the hills where they may find their goal. Party B has made progress but their overall route proved to be too long to beat party A.

Party A took a direct route and found it to be difficult but not difficult enough to thwart victory. Party B made some small benefit from their guide but took too wide route to beat their competitors (maybe they can waylay the other party and take the loot?).

This race may have indeed played differently if there were random encounters along the way and there were potential consequences to failed travel rolls beyond a lack of meaningful progress.
Posted by JDJarvis at Tuesday, May 10, 2011