One reason for the Alternative Hexcrawl concept I brought up in a recent post is to keep the players involved with travel.

"We move 3 hexes north, anything happen, do we see anything worth investigating" over and over again isn't the most exciting player input nor is sitting at the game table and watching the DM roll a dozen random encounter checks .

By applying travel scores to leave a hex the DM has more to tell players about the travel they are facing and is giving them some choices. And dice rolling keeps the players hands and minds enaged even if a bit. Players could take turns rolling the travel dice or have the parties leader (if any) or scout/point man roll the travel dice.

How to give the player choices:

Let's look at two parties on the sample map. 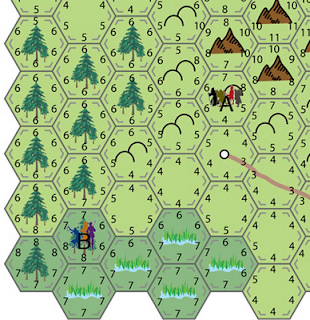 Party A is situated in hills. With Open land to the south, mountains to North and North East and Hills to all other points.

Party B is in Forested Swamp terrain with Swamp to the South and South East, open terrain to the North East and Forest in the other directions.

By applying the Travel scores the descriptions that can be offered to the players varies.

Party A is situated in hills. Travelling to the open land downhill looks easy. To the south east alogn the hills the route doesn't look particularly challenging. To the north east the terrain rises to the mountains presenting the most challenging route from the party location. Northward trave into the moutains is certainly more difficult then continuing in along the hills but not as difficult as traveling northeast. North west and South West there is hilly terrain more challenging than traveling south east would be but not as difficult as moving towards the mountains would be.

PC questions: why does the route North look better then going northeast?
DM answer: the slope seems gentler and there are a number of minor trails you can spy hear and there.

Party B is situated in a Forested Swamp and has poor visibility as such. The party can't see what is in adjacent hexes unless they climb a tree or have other means to get a good view but some information can be shared. The ground to the South is wetter with more drowned and fallen trees. To the southeast the trees seem to thin out without as much hazard presented as to the South . The ground looks seems drier to the North, NE and NW with the trees thinning out more towards the north east. a dense barrier of sunken trees makes travel to the South West look difficult.

PC actions: Smillo looks for a good tall tree to climb so he can get a good look of the surrounding terrain.
DM reply: to the S & SE more swamp with less trees, open ground to the northeast and forest in all other directions.

Some of those descriptions could certainly be generated from the terrain types dominating each hex but the travel numbers do offer a way to quickly gauge relative difficulty of specific directions.

Don't tell the players everything or let them know the travel scores out of each hexside unless you are shooting or more boardgame style of play (which isn't a bad thing at all if you have attractive maps you want to share with the players, it does reduce mystery and the thrill of discovery). The trick of it is leaving little bits of information out that the players can fill in with questions and actions.

If they players have more to do then crossing off rations as they are consumed and reacting to random encounters the game is more dynamic and there is more to do.
Posted by JDJarvis at Wednesday, May 11, 2011