Here's a map for an alternative hexcrawl technique I'm knocking about: 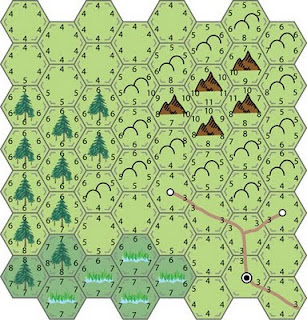 Each hex side has a score for getting out of the hex in each direction (along a hex side). A party will have a given number of rolls each day/outdoor turn based on their movement rate and can only leave a hex if they get or beat the required roll (for now I'm considering 2d6 to be the roll). Multiple attempts to go in the same direction could get a bonus. Any number of modifiers could be applied to the roll such as travel mode, weather, guides, racial abilities and class abilities along with clever planning.

Just a notion for now but one that I felt like sharing as it looks like it could expand on the nature of hexcrawl play by having routes and specific terrain having an impact on play.
Posted by JDJarvis at Sunday, May 08, 2011