Last post villages and castles were placed on the mini-campaign map and a little deduction was used to make them meaningful for the campaign. I want to populate the castles and the villages but we need to know what evil lurks out there also. Time to place dungeons, lairs, and ruins. I’m going to do them as one thing for now and decide what they will become as I go.

In placing lairs, ruins, and dungeons I’m going to do things differently from before. I’m going to check every hex with a d6 roll, on a 1 or a 2 we have a lair,ruin, or dungeon. What the location becomes will depend on what is nearby. 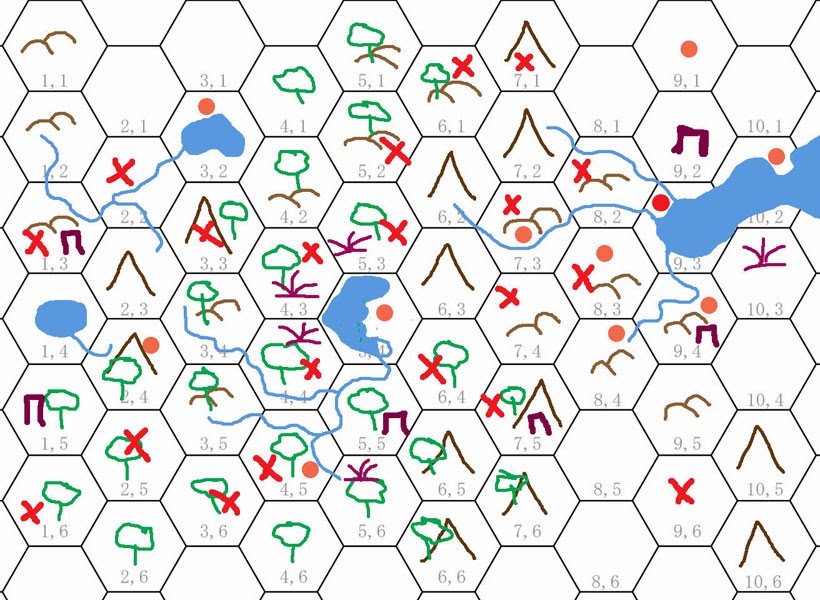 Now for a little quick deduction based on location.
1-3 is in the same hex as a castle, this one will be a ruin.
1-6 if off in a forest, prime placement for a lair.
2-2 is out in the open, a ruin.
2-5 is Is in the woods, some walking to, it shall be a dungeon.
3-3 is a good spot for a dungeon
3-6 shall be a lair.
4-3 is a good spot for a ruin, this will be a big one I think maybe a city of the ancient occupants of the region, mostly looted but with some remaining secrets.
4-4 is a cool spot for a lair even better as a bandit camp, so it shall be.
4-5 has  village in the same hex, let’s make this a ruin, maybe an old burial site.
5-2 is out of the way , some hills and forest, we’ve got an intact dungeon.
5-3 we’ve got a neighboring dungeon and ruin, this shall be a lair.
6-1 a lair or maybe a rebel camp…yes it shall be a rebel camp.
6-4 is a mostly looted dungeon, pillaged years back.
7-1 is just begging to be a dungeon, looted years ago by the overlord and his companions but is being slowly repopulated by goblins and worse.
7-3  A ruined castle of the old regime.
7-4 a dragon sleeps here.
7-5 a  forested mountain with a castle is here and so is a classical dungeon under the castle.
8-2 an empty dungeon sometimes used by thieves, smugglers, or cultists
8-3 a buried treasure is secreted in this forgotten tower of the old regime.
9-6 a remote ruin, sacked years back by the overlord but still has some goodies to grab and curious residents.