A horrifying monster to challenge your players with from my recent sketch post. 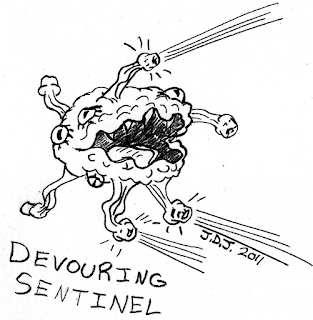 
These cunning subterranean dwelling creatures resemble 7-10' wide bumpy/crusty levitating bivalves with wicked fangs, a number of peering eyes seemingly placed randomly about their bodies and an assortment of writhing pseudopods extending from their shell. The Devouring Sentinel is an intelligent creature and is sometimes summoned and bound by power spell-casters to guard a treasure or area.

The Devouring Sentinel moves with a permanently active telekinetic flight that is not prone to disruption by effects hostile to magic.

The mouth of the Devouring Sentinel is vulnerable when the creature is raging or mocking it's prey as well as when it is attempting to snare prey with it's tongue or make a bite attack.

The Devouring Sentinel can attack prey up to 30' away by extending it's tongue in manner similar to that of frogs and snaring man-sized or smaller prey. The victim will be held fast and drawn to the creatures mouth (if a save fails) where they will be automatically hit by the creatures bite attack each round until the victim is devoured. A Devouring Sentinel can attack a small sized foe and swallow them whole in this manner and will be able to consume them with it's mouth clamped shut. Man-sized prey will be able to fight back but smaller foes will be hopelessly trapped. Only one victim will be devoured at a time.
Equipment carried by a Devouring Sentinel will be swallowed into the creatures transit sack an organ not unlike a bag of holding. The loot will be expelled back at the creatures lair. f one can retrieve the sack (only possible when it's empty as death of the sentinel will cause any items in the sack to rip it open) a magic-user in the know may use it to produce a bag of holding.

As horrible as being devoured by the Devouring Sentinel may be the most feared attacks from this creature come from the high pressure sprays emitted by the pseudopods. Each Devouring Sentinel will have half as many pseudopods as it has hit-dice (plus or minus one). Each pseudo pod can be aimed at virtually any target. Each pseudopod spray can be used 3 times a day and may be targeted against a single foe up to 60' away, the victim may avoid or diminish the attack with an appropriate saving throw.

There are rumored to be massive colonies of these creatures deep underground or on other planes. Some Devouring Sentinels may have pseudopods with characteristics that differ from the norm, they are considered mutants and hunted down by their kin.

License: anyone is free to use the Devouring Sentinel as presented here in their game related postings online, periodicals and published RPG game products (including print and pdf) so long as they acknowledge the copyright to the Devouring Sentinel and provide notification to James D. Jarvis of use ( a comment on this original blog post is fine). The Devouring Sentinel is not in the public domain but may be used as spelled out in the license.
Posted by JDJarvis at Tuesday, October 25, 2011