We threw a party for my oldest son this weekend. A number of the guests were members of the school D&D club so I whipped up a quick dungeon-crawl and a mess of PCs for the kids to choose from. Here are the sheets of 5 of them (minus the character art borrowed from the internet). 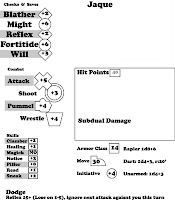 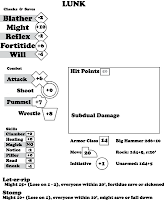 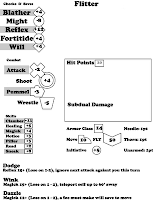 As you can tell from the sheets I went with a D20-like set of stats for the game deciding not to go old-school. I did this for 2 reasons: keep the players in a comfort zone and create something new. While it was D20-ish I dropped a log of baggage simply with the reduced and altered stats. I used a spell/special ability mechanic that cut down on the need for bookkeeping and add a little uncertainty to things.

The 5 characters above were among the 15 I whipped up, one of them was certainly the worst character in the set but still saw play. Can you guess who that was?

The adventure was a simple but fun dungeon-crawl with copious wandering monsters, messes of skeletons, giant bats, goblins,hobgoblins, a pair of wraiths and a dragon (the players never met the dragon). The player of Flitter managed to botch the roll and lose that character's best special ability in the first encounter. A plain old pit trap got (but didn't slay) 2 PCs. One of Lunk's special abilities proved useful agaisnt a number of goblins until they party found their way deep into the goblin lair and had a long and protracted fight against them that kept Padre Hector busy bandaging Lunk and Jaque both of whom would have surely perished without his aid.