The following is an outline and map of the exploits of the black-heart treasure seekers that are the PCs in my regular Tuesday night game. 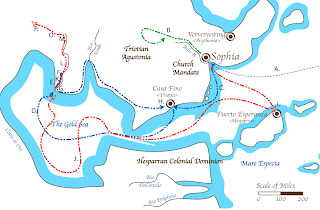 A. June 1st. Party arrives in The New Lands from Aroa as part of The Fifth Fleet, 2 ships were lost. Some rigors were suffered.

B. July 1st-Sept 1st. Party raids into Snake Garter territory to go scalp hunting. They are accompanied by cousins of the Wellaganch and find safe harbor in a village of those people. A hunt in Howlie territory is a success one adolescent Howlie is tracked and slain. Raid on Snake Garters is successful but stirs up hostilities in the region. Party returns to Sophia with several dozen scalps.

C. Party hears rumor about "Cities of Gold" from an explorer and learn they can be found from a place known as The village of the Red Roofs. They book passage on he Shellcrest and stop over in Casa Fino.

I. Feb 17. Party Arrives in Puerto Esperanza to hire ship and mercenaries for expedition.
Some comment on that here.

K. The Black Eagle sails upriver. Further friendly contact and trade made with the Makar.

M. April 16th. Arrive at Village of Balck Roofs. It is in ruins having been raided nby Snake Garters weeks earlier.

O. April 30th . black Eagle Travels up Shamawa River but can only go so far.Anchor is set, camp is built and boats taken upriver.

P. May 5th. City of Gold spotted in morning sun. A large pueblo cliff-side city spotted glowing in morning sun as if made of gold. Players have scouted "city" and launching a raid.

In real life the play outlined above was from play this early summer to the past week.
Posted by JDJarvis at Sunday, October 23, 2011