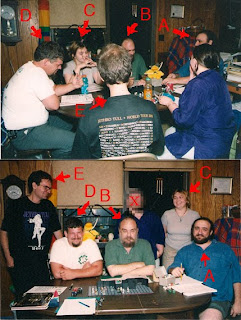 A bit of personal gaming archeology.

A- me with an awful lot of hair.
B- my father, been gaming with me since I first picked up dice, still a regular
C- Alicia, college kid (not sure if she was 21 or not then), she's gone on and gotten herself a career. Haven't seen her in years.
D- Dave, our resident cheating bastard. Still games with us on a regular basis. His son has been a regular also for the past couple years. Known him since school.
E- Matt, my daughter's godfather, he passed away in September of 2006. He had a lifetime of health issues having had 2 heart transplants in his life and was a heck of a good guy.

During this era there were other frequent players one guy we lost to a job in the midwest he played a monk we knicknamed "fighting santa", another is one of my oldest friends who lives the next town over (we shared a locker in the 8th grade), another is a young lady in the military now, another woman moved to Florida and yet one more player whom I've known since adolescence is a regular to this day (he should have been in the picture but he goes through months of absence every couple years).

The table in that picture had as many as 14 people packed around it some nights.

(Oh yeah, I made my resurrection survival roll and somebody is grounded until he starts pre-school.)
Posted by JDJarvis at Tuesday, November 23, 2010