Ever want to map your whole game world. Not just the main campaign area but the whole world?
I'll admit it I have. I have to settle for projection problems caused by drawing a the surface of a sphere (a planet) onto a plane (the map). With modern software and computers we can draw a 3-D globe. 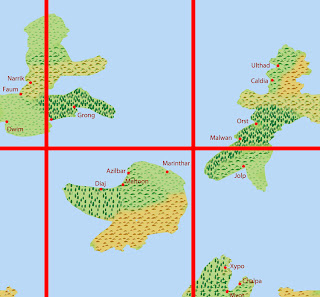 Here's a couple shots of that sample world map wrapped onto and rendered on a sphere:

Not amazing since the source map was so simple and low res but definitely proof of concept. cool thing is 3D software, even something as simple as the 3D feature in newer versions of Photoshop let you draw on the globe itself.

Just have to figure out how to map relatively non-distorted hexes onto the 3D globe for a traditional hex crawl.
Posted by JDJarvis at Wednesday, October 16, 2013