Here's a little map a sketched while away on one of the many pads of paper I received over the holiday season: 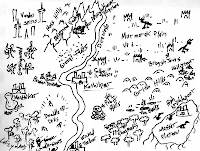 This is technically just a doodle and being the ceaseless campaign builder I am it's a campaign map. After but a few moments of reflection here's what's on the map.

We've got pterodactyls and dinosaurs sharing the Messar Plateau with the city of High Krithalapoor.

The eastern most extent of the Grith Hills is marked by the ruins of Valistoor the Fallen.

Mungwrack the dragon sleeps in the Splintered Peaks and to the west through the moss hills one finds the Vander Spires. the Vander a strange un-men that do not build clustered cities like men but in far flung collections of high towers that keep each other in view miles away.

The grasping wood is full of carnivorous tentacled trees. The roots of those trees creep ever towards the ruined city of Broken Drathar which lies across the Direwash river from the city-state of Kathilpar.The city state is plagued by raids from the brogglejums in recent years and much fertile land to the northwest now lies fallow.

The forest of the Shagmocks is home to a ape-like race of cannibals.
Wicked Thelloor dominates trade to the south.

In the west along The Meer Sea the men of Manthikar trade with caravans from the west and and the meek Dwaddle-men who harvest the lumber of the Lofty-woods ever fearful of the lurking Grindle-Groots.
Posted by JDJarvis at Monday, January 10, 2011