for No Man's Land - Mutant Front 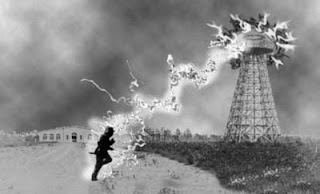 The Mk-1 Electro-Cannon is a huge device (up to 200' tall) that builds and delivers fearsome electrical charges capable of causing significant destruction at a distance. A MK-1 requires a special dedicated power station that must be powered up along with the weapon, it takes about 20 minutes to go from a cold start to being able to charge the weapon for effective use.
After the warm-up period each round of charging will allow a electrical bolt to be hurled at a target in range for 1d6 damage (minimum of 2 dice required for a discharge). Organic targets struck by the electrical bolt must make a save vs energy attack or be incapacitated for 10 minutes, mechanical-men and other automated electrical systems must make a save or be incapacitated for 1 minute per point of damage suffered.
Each firing of a Mk-1 Electro-Cannon reduces the total discharge capacity of the weapon. If charged to 16 dice and a 4 dice bolt is discharge 12 remain for additional firings. Once a bolt is discharged additional charges can not be added to the discharge capacity until all charges are expended and a cool-down period of 1 round per dice formerly charged is required. Ex: If a Mk-1 Electro-Cannon is charged up to 18 dice and fired in bolts totaling 18 dice in potential damage there is a cool-down period of 18 rounds required before the device may be charged again (leaving electro cannons somewhat vulnerable).
While Electro-Cannons are charging or holding a charge mechanical-men and aerodrones within 200' of the unit must make a save vs energy attack or they will be unable to function properly for that round (mechanical men will be helpless, aerodrones will go off course and are likely to crash).
Because of the electrical fields in action Mk-1 Electro Cannons may NOT be placed within 300' of each other.
Due to the nature of the operating station and firing controls hitting a man-sized target has a -2 penalty in addition to normal penalties.
Posted by JDJarvis at Sunday, December 05, 2010