Prettied up the map and added color for each hex. The colors are for a touch of strangeness and a way to keep track of different areas, eventually the hexes will be prettied up more with more color and sharper graphics but for some time this will do the job: 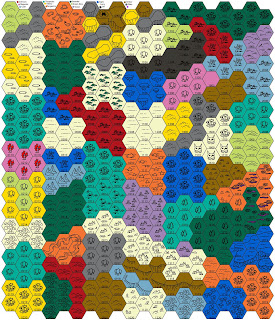 There are two more colors than appear in the source material, I like Umber and Slate. Some of the same general terrain has different colors, others might look alike on the map for now as only the very general features can bee seen for now. With minor variations the hexes are the same as listed last post.

Now I have to start populating the map with ruins, tombs, castles, settlements, towers, lonely houses, and other weirdness. After that must generate encounters for each hex, I'm shooting for more detail than found in the original Carcosa but less then D20 Wilderlands.

I have not abandoned my MOG campaign, this is part of it but far enough removed from the midlands I'm treating it as it's own thing for now.